Rather than write this week, I created a digital story based on a previous post called Our Great-Grandmother’s Gardens. I loved putting old photographs to Flora Hunsley Smith’s story. Although she was a quiltmaker herself, none of her quilts have survived, so for background images I used quilts that were passed down to me from my Grandma Short on my father’s side of the family. I had fun with the transitions between quilts and flowers, looking for similar colors and textures. The music came last. I knew I wanted a traditional piece but hadn’t imagined something this melancholy. I loved the title–and Rayna Gellert’s liner notes–and its driving tone captured the sense of perseverance I associate with my great-grandmother’s life. “Coming through the rye” says it all for me–you come through life the best you can by making the most of each day.

On Thursday mornings at Stonebridge we work with a small crew of bartering members in the gardens, doing the tasks for which “many hands make light work.” With the cool weather and wet soil, I hadn’t yet planted gladiolas, but yesterday with the help of two other women—one my age, one twenty years younger—we got them in the ground. Thursdays’ biggest pleasure is the wide-ranging conversation in the field, and yesterday was no exception. As we laughed about the inconsistencies of patriarchal religions that undoubtedly informed our feminist views, we dropped corms into holes spaced three and then two across the bed like cookies on a sheet, but the more we laughed, the more crooked our rows became. Every fifth row or so, we’d have to stop and start again with a straighter line. We planted just over 200 gladiolas, beginning with 60 new bulbs in deep red, violet-blue, and hot pink, and finishing with corms dug last fall and stored in peat moss in the basement. In August, we’ll have a vibrant stand of elegant gladiolas welcoming us to the garden.

Our next task was weeding the long bed of transplanted head lettuce, only a couple weeks away from harvesting. Using our horis—our favorite Japanese digging tools—we weeded with our knees in the clover walkways while sharing stories of our grandmothers, or at least the pieces we know.

With the help of the alumni association at Valparaiso University, I’ve just found my great-grandmother’s name listed in the 1890 Northern Indiana Normal School’s catalogue under the Teacher’s Department pages:

Flora Delcina Hunsley had traveled from Decatur, IL, at the age of 22 to get her teaching degree at the same school her brother Jake had attended for music a couple years before. What a thrill to see her name 120 years later, evidence that my great-grandmother was a college graduate and a teacher like me.

That catalogue is one of the few documents we have for Flora’s life; the rest of the story can only be pieced together. At the Normal school, she became friends with Lola Belle Huckleberry, who had a stepbrother named Jasper Lemuel Smith. Although he was 10 years older, Jasper and Flora met, courted, and married after she had taught school for a few years in Illinois.

Flora and Jasper before their marriage

My great-grandparents moved to North Dakota to homestead after Flora’s brother Jake had staked a claim there and her parents, Malinda and Charles, originally from the English county of Lincolnshire, came too. Flora and Jasper raised five children, including my grandfather Kermit, on the Waterloo Farm, named after the family place in England. Their lives were typical of farming families, raising crops and livestock on the windy prairie. 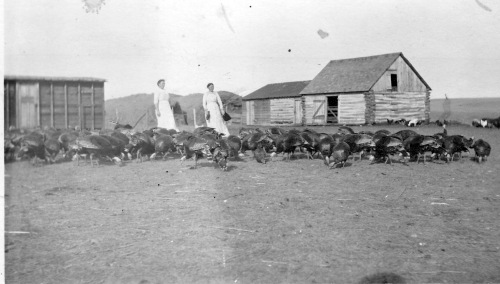 Flora Hunsley on the right with her turkeys

But after their deaths, their children found their parents’ secret in an old trunk: another document–their marriage certificate, dated one year later than the wedding date they’d always claimed. Flora had gotten pregnant before they were married. Since they’d left Illinois, no one but their parents and siblings were the wiser.

Not an unusual story, but I wonder how Flora’s life might have been different without that surprise. She probably would have married her best friend’s stepbrother anyway and as a married woman, would have had to relinquish her teaching position, as they did in those unenlightened days when marriage meant pregnancy and pregnant women in the classroom wouldn’t be proper. She probably would have followed her brother to North Dakota too, just as she followed him to college in Indiana.

But I like to think that she never entirely forgot those days of relative freedom with friends, going to classes and living away from her family. When my aunt was born, my grandparents named her Lola after Flora’s best friend. A college picture tucked into my aunt’s baby book shows the two of them in black dresses with buttoned bodices, their aspirations still ahead of them.

Flora seated with Lola in the middle behind her

It’s a good story and I’m sorry I never met Flora, but I’m happy that I’ve followed in her teaching and farming footsteps. I can’t help but think of Alice Walker’s influential essay “In Search of Our Mother’s Gardens,” in which Walker writes of “Sainted” and “crazy” Black foremothers who, denied legal, economic, and political power, still told stories and planted gardens and pieced quilts of “powerful imagination and deep spiritual feeling”: “And so our mothers and grandmothers have, more often than not anonymously, handed on the creative spark, the seed of the flower they themselves never hoped to see: or like a sealed letter they could not plainly read.” If you haven’t read Walker’s essay lately, you should.

These are the stories we tell as we weed lettuce and plant gladiolas and plot the trajectories of our lives. As we search for our mother’s and grandmother’s and great-grandmother’s gardens, what better place to start than our own?