The grass has riz,

January 1st is the beginning of a new year when we make promises for the twelve months to come. But spring brings its own sense of renewal. After winter’s chill, I’m always cheered to find the daffodils naturalizing along the ditch bank in bloom again. 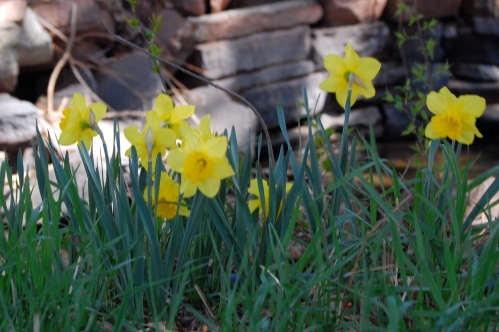 March was warmer this year than usual, with NO SNOW. I’m capitalizing it because I can’t remember a March without snow here on the Front Range. We’ve always had snow in March, and not just snow but BIG snow, with many wet inches blanketing the ground. Sometimes, March snowstorms close schools and airports. On my 50th birthday three years ago, the snow was so wet and deep, everything shut down. I even had to cancel my birthday plans for chocolate soufflé at Le Central in Denver.

With no snow in March this year, we were a little worried about getting the season off to a good start, so snow two nights ago and a few stray flakes and misty rain yesterday were welcome. Even better, the temperatures didn’t fall low enough to hurt the fruit trees that have already started blossoming. Trees in bloom this time of year hold promises for the season. If we don’t still get a hard frost (entirely likely in April or even early May), we’ll have apples for cider pressing this fall. 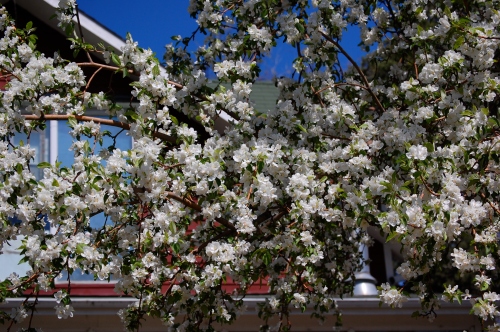 The old apple in front of the house

This week’s moisture encouraged the seeds John planted last week to emerge in the spring garden. The sugar, snap, and snow peas have germinated well, pledging many pleasant hours of picking in the pea patch to come (try saying that three times). This Saturday we’ll transplant thousands of alliums—onions and leeks—into the moistened beds. Maturing from stout, grass-like blades to round, juicy globes, alliums spend the longest time of any crop in the ground. Once they’re planted, they ground the season with an assurance of dinners to come.

All this generative growth holds another kind of promise, one transacted between farmers and the earth. If we do our part—planting, watering, weeding, thinning, and harvesting–the soil, water, wind, and sun will do the rest. I think we get the better end of the deal. As we start a new season of renewal, let’s work with spring’s optimism toward potent dreams, garden fresh and ours for the growing.