The Natural Affinity of Children and Chickens

Yesterday was our five-week-old grandson’s first trip to the farm. He slept most of the time but we took him on a walk anyway to get some sunshine and show our oldest daughter the crops. We even tucked the baby into the hanging barn scale to see how much he’d grown. 11 pounds, including blankets! He’s getting big and strong too, holding his head up longer each time we see him and trying to scoot on his tummy with his toes.

Too bad he was asleep when we visited the chickens. Most children love watching the hens and will stand, mesmerized, for longer than anyone could imagine their attention span would last, poking a blade of grass through the chicken wire and squealing when a beak nips out to grab it. Children and chickens seem to have an affinity for each other, perhaps because they sense a mutual beneficence and similar proximity to the ground.

I had intended to clean out the chicken coop yesterday but with our grandson’s first visit, put that plan on hold until today. We have 18 chickens right now, a full coop. Most of them are older and not laying anymore so we joke that we’re running a retirement home for hens. Six of our chickens are new, though, raised this spring to replace the older ones we anticipate will die a natural death this coming winter. The new chickens haven’t started laying yet but once they do, we’ll have a good supply of eggs again. 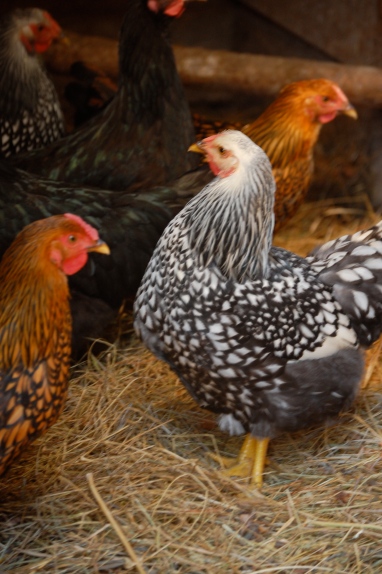 The new chickens–silver and gold-laced Wyandottes

Once a year, John and I muck out the chicken coop. More than just the routine raking out of old, dirty hay, mucking the coop involves the red Farm All tractor with its front bucket, breathers for the dust, and a couple hours of digging down into eight or ten inches of composted hay and chicken poop and forking it into the front end bucket. That might seem gross to city folks but it isn’t as bad as it sounds. The layers of muck flake up easily and, since it’s decomposed into essentially soil, smells more earthy than stinky. John empties the tractor bucket into our big compost pile and turns it in with the vegetable scraps and leaves our CSA members have left us. With childhood memories of my grandparents’ chickens, I never mind the smell of the coop but I don’t like the dust that gets kicked up, hence the breathers and farm clothes that go straight into the washing machine when we’re done.

The best part about mucking out the coop is filling it, inside and out, with fresh hay. Today’s hay is as fresh as it gets because John mowed the pasture last week. (Hay, by the way, is cut grass; straw is the stalk of wheat or a similar grain). That hay—the season’s second cutting–will last us and the chickens all year. We fill their nest boxes with it every few days and add more to the coop as needed. In years past, we’ve stored it on the hay wagon or under a tarp, but this year John’s building a new storage box right between the coop doors to keep it fresher and handier, a small improvement but a significant one because it will save steps and make the chickens more comfortable too.

Mucking the coop isn’t a big chore but it’s not a little one either. It’s a late summer task, one that shows up on the to-do list in July and waits until the heat wave’s over and the demands of watering and weeding relax. I might even call it a ritual because it marks another year on the farm, another season passed. Too, it’s something John and I do together each year, sort of an annual date, and doing it together makes the task more enjoyable.

This year mucking the coop became a little more urgent when I found a bull snake inside last week and realized that may have been the reason for the skimpier number of eggs we’ve gotten lately. Although with chickens, one never knows–it could be a lull between the older hens finishing their laying cycle and the new ones beginning. But if the snake’s been eating eggs, hopefully our presence in the coop today has compelled the thing to move on.

Beyond eggs and compost, I like the chickens for their company. I like taking our compost pail out to the coop each morning; I like how excited the hens get when I throw the grain and vegetable scraps in the coop yard, nudging each other out of the way to grab the piece they want and running to a corner of the coop with it in their beak to eat in private. I like that as long as we feed them, give them fresh water each day, and keep the coop reasonably clean, they’ll give us eggs.

I like, too, that the chicken coop is a convivial place on the farm for children and their parents. I like how trusting chickens are of our stewardship and how we depend on each other. Our chicken coop isn’t fancy—not anything like our friends’ beautiful chicken “palace” with the egg finial on top—but it serves our purposes for now: sheltering happy and healthy chickens laying delicious eggs.

I can’t wait for our grandson to discover the chickens, throw them kitchen scraps, and feed them grass through the chicken wire. Now that he’s here, taking care of the chickens and their coop seems even more important because we want this farm to survive for his generation and beyond. We’ll keep performing the small rituals like mucking the coop and making the small improvements that increase our productivity, efficiency, and comfort. We’ll do it all more mindful of the future and careful about the steps we take to get there. And in a year or two, we’ll get to something else that’s on the list: a treehouse for a little boy to dream in.