Making the West Our Own

In my first semester of college in 1977 at Colorado State University, I took a Women of the West literature class from Dr. Rosemary Whitaker that introduced me to powerful writers like Willa Cather, Mary Austin, Mari Sandoz, and Isabella Bird, writers who revealed a different picture of the West than the TV versions on which I’d been raised.

Last night I attended a reading by two novelists who continue that fine tradition. Barbara K. Richardson, author of Tributary, and Laura Pritchett, author of Sky Bridge, have created female protagonist that challenge, in Pritchett’s words, “the myth of the Western cowboy who needs a woman and minorities to help him out.” Set more than a century apart, these two works enlarge our portrait of the West by placing new stories and characters on top of the familiar ones.

Barbara Richardson’s Tributary, newly published by Torrey House Press, is the story of a young woman in Utah of the mid-1800s who refuses to participate in the Mormon church and its submissive roles for women. Tributary’s protagonist, Clair, is an orphan raised by Mormons during the church’s growing dominance of Utah’s social and economic order and its shift to polygamy, something not all Mormons favored.

As a young woman, Clair resists marriage as a third or fourth wife, choosing instead to live alone in a shack belonging to Ada, an older apostate woman. Moving to New Orleans and back to Utah to work on Ada’s son’s ranch, Clair learns to trust her own moral sense and to forge a life independent of marriage with a new model of family and love.

Set more than 100 years later, young Libby also creates a new kind of family in Laura Pritchett’s Sky Bridge when she chooses to raise her younger sister’s baby. Like Clair, Libby finds support from others in her small, rural community whose lives have not followed a standard path. Libby is not educated but she is wise, learning more about the world outside her home but choosing to remain there on her own terms anyway.

Both Tributary and Sky Bridge prove that the people who settled the U.S West, as well as the people impacted and displaced by that settling, have important stories to share beyond cattle and sagebrush and white men driving one across the other. We can learn much from these novels about the history of the West: not all women in Utah were or are Mormon wives; not all young Colorado women leave their rural roots behind.And in both novels, the beauty of the land, however harsh and spare, offers what another Western writer, Gretel Ehrlich, calls “the solace of open spaces.”  Here even isolation can offer comfort to women when coupled with new opportunities for independence and growth. 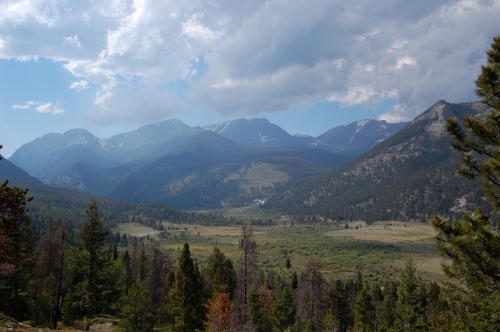 When I asked Richardson and Pritchett if the creation of alternative family structures is part of the story of the West, they both agreed. Pritchett responded that in her own life and in other works like Kent Haruf’s Plainsong, the need for community in such a difficult landscape spontaneously inspires new definitions of family: “We just did that.” Richardson spoke of the obstacles faced by outsiders from the Mormon church. An audience member suggested that the West’s wide open spaces create the desire to overcome isolation in ways not experienced in more populated regions.

I agree and, having grown up here, find that the West’s iconoclasm goes beyond merely individual identities to the formation of unique groups coalescing around the urgency of survival.  Too, the West’s tolerance of difference—never guaranteed or complete but often at hand—allowed opportunities for parallel, if not inclusive, social structures to develop. This is not to discount the West’s brutality of exclusion and violence, but to remember that we now have the literary tradition to look for other stories alongside and in between the myths.

Following the auspicious legacy of Sandoz, Cather, Austin, Bird, and others, both Tributary and Sky Bridge would provide lively discussion for book clubs. Better yet, read them together to view new portraits of women’s roles here in the West.

To my readers: I’m excited to announce the publication of my book, A Bushel’s Worth: An Ecobiography, from Torrey House Press next August. I’ll share more in the coming months but, for now, click on the title for more information.